The Communication on Better Regulation for Better Results builds on the progress the Commission had already made with impact assessments and the REFIT programme. It also outlines further measures to commit better regulation to the everyday work of the Commission. By further opening up policy-making and interacting better with those that implement and benefit from EU legislation, the Commission aims to produce higher quality legislative proposals and to ensure that existing rules deliver important societal goals more effectively.

The actions the Commission announced in the Communication can be structured around three themes: actions relating to further including stakeholders in the lawmaking process, actions to achieve better law-making, and actions to improve existing laws. 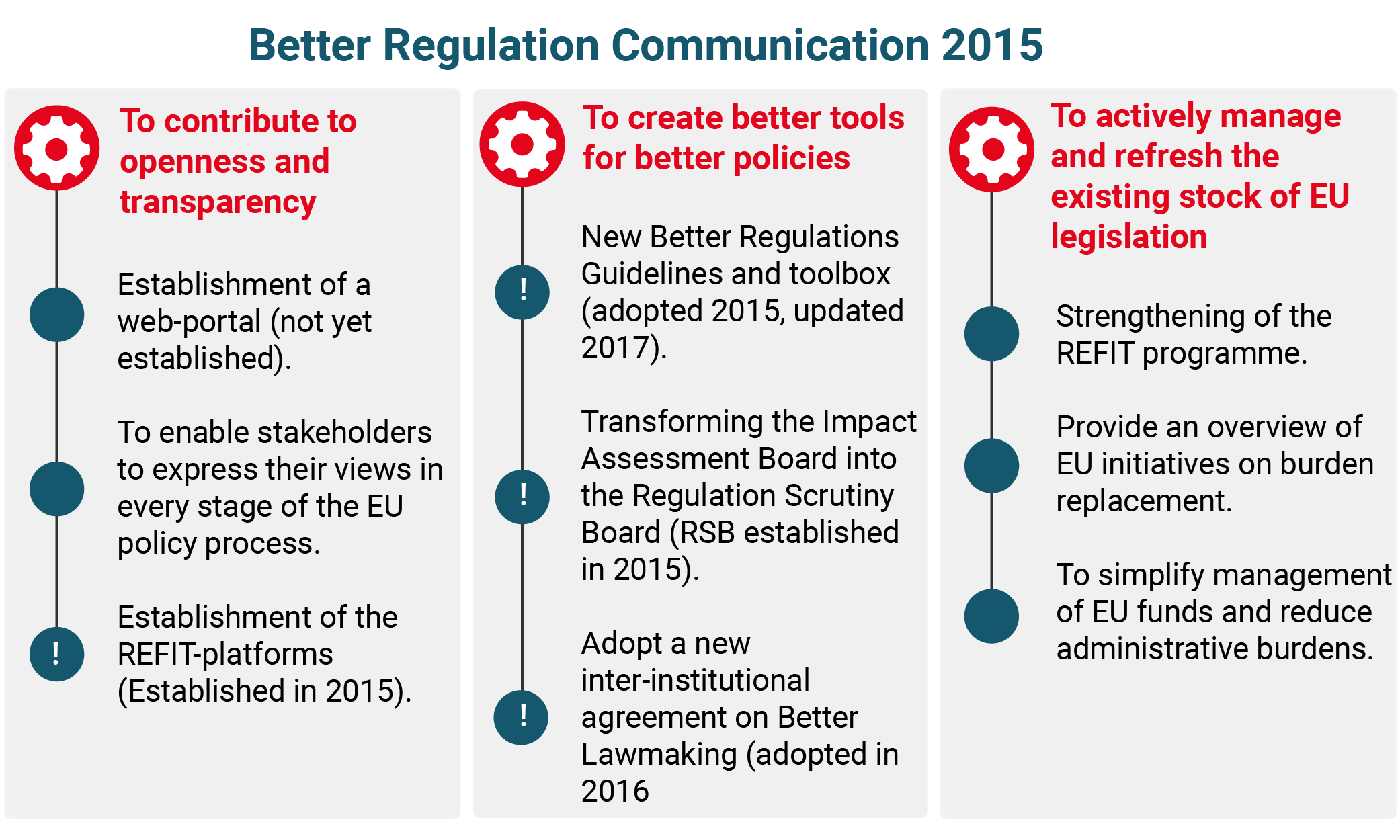 The Commission has published two follow-up communications in 2016 and 2017 to the Better Regulation Communication.

To contribute to openness and transparency

This web portal has not been established yet. In the 2017 Commission Communication on Better Regulation, Completing the Better Regulation Agenda: Better solutions for better results, is mentioned that the Commission, together with the European Parliament and the Council of Ministers has developed and is taking forward a plan for a new joint interinstitutional web-based portal to improve the transparency of the legislative process. The Commission’s webpage Track law-making mentions that, currently, the best way to track the status of legislative initiatives is through the website EUR-Lex.

The establishment of the REFIT platform

The guidelines and Toolbox were reviewed in 2017, to include all issues covered by the Inter-Institutional Agreement on Better Law-Making, such as recast, codification, “cost of non-Europe”, monitoring and evaluation of legal provisions.

Contrary to IAB, the RSB will also check major evaluations and “fitness checks” of existing legislation.
The Regulatory Scrutiny Board was established by Commission Decision on the 19th of May 2015.

This Inter-Institutional Agreement (IIA) was adopted April 13th 2016 and replaced the previous IIA on Better Law-Making of 2003.

To actively manage and refresh the existing stock of EU legislation

Furthermore, the Commission called upon the European Parliament and Council to give strong backing to initiatives designed to improve the effectiveness and efficiency of the existing stock of legislation.

Other initiatives the Commission is undertaking to reduce administrative burdens-

This varies from executing reviews and evaluations to simplifying procedures and repealing outdated legislation. In regard to Member states, the Commission is committed to keep cooperating to ensure compliance with EU law on the national level, for instance on the transposition of EU directives.

Finally, the Commission has stated to continue its work on the simplification of the management of EU funds, to reduce administrative burdens. The progress of this can be monitored through the Administrative Simplification Scoreboard.