Delegated and Implemented acts are EU acts that are of a non-legislative nature but are legally binding. This means they are (usually) adopted by the European Commission to update, amend or supplement EU legislative acts (EU regulations and directives) without a formal legislative procedure. 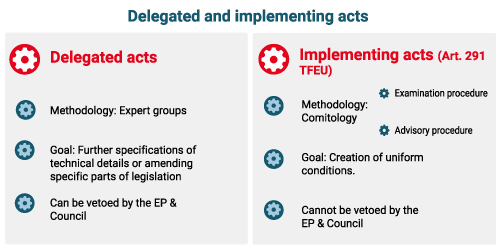 Delegated acts are non-legislative instruments which the Commission is allowed to adopt when the EU legislator (Council/European Parliament) has delegated that ability to the Commission through an EU legislative act. The purpose of these acts is to supplement or amend specific elements of legislative acts and are by nature non-essential. This means that they are not necessary for a certain regulation or directive to come into force. In this regard, delegated acts can be seen as an extra layer of a certain EU regulation or directive.

These committees are thematically organised and consist of representatives from the Member States. The comitology system means that the Commission cannot act on its own and needs approval from the national experts in these comitology committees. Before a comitology committee votes on a draft implementing act, stakeholders and citizens can provide feedback during a 4-week consultation period. The collected feedback during this consultation is also presented to the committee.

There are two types of committees with corresponding adoption procedures.

When the examination committee can’t reach a positive opinion or a negative opinion, the Commission can however still adopt the implementing act. Certain circumstances can limit this, for example, if the corresponding EU legislative act explicitly prohibits this.

A significant amount of EU regulations and directives are supplemented by these non-legislative delegated or implementing acts. Therefore, these consultations can be a valuable and additional venue to provide feedback on a certain EU policy issue or regulatory bottleneck.